The Chicago North RWA Spring Fling 2012 Writers' Conference went off fabulously! The quality of the Chicago Mariott NW venue was superb, in looks and service, with the added bonus of being only 20 minutes away for me!

Lots of great workshops, terrific featured speakers, and many chances to network. Also, some free books from featured speakers, a tempting array of books to purchase in the bookstore and at the book signing. Of course, I came home with a bunch for my TBR pile, which is quite large as it is.

The committee did a terrific job putting this quality conference together. I'm hoping the same people step up to the plate to volunteer next time.

You can find 53 photos from Friday, April 27 and 34 from Saturday, April 28 at my Facebook page -
http://facebook.com/morganmandel


Just a reminder - for Excerpts and Buy Links to all of my books, Check out
http://morgansbooklinks.blogspot.com/
Posted by Morgan Mandel at 9:07 AM No comments:

Things have been hectic lately, with preparing for my Book Launch Party, working on two short stories for The Corner Cafe anthology, soon to be released, plus keeping up with my guest and group blogs.

Friday and Saturday are the Spring Fling Writers' Conference, and I'll offer a report on some of the highlights here.

Posted by Morgan Mandel at 9:09 PM No comments:

Recap of Week Starting April 1 and Preview of Upcoming Week

If you missed any of my guests during the week, here's your chance to catch up.
Also, mark you calendars to check out any of my upcoming guests.

WEDNESDAY, APRIL 4, 2012
Mystery Author, F.M. (Marilyn) Meredith, stopped by to tell us about her new book, No Bells, in the fantastic Rocky Bluff, P.D. series, and to share some of her publishing tribulations along the way -
http://morganmandel.blogspot.com/2012/04/please-welcome-fm-marilyn-meredith-on.html

THURSDAY, APRIL 5, 2012
Spunky Seniors and Talents Guest Was Author Roseanne Dowell, Who Showed Us Another of Her Talents Besides Writing At
http://spunkyseniors.blogspot.com/2012/04/spunky-author-roseanne-dowell-shares.html

She's an English College Instructor & Guest Lecturer, Along with Being an Author
Her Topic - It's Not Too Late to Start or Return to College

Please Welcome F.M. (Marilyn) Meredith on Tour For Her Mystery, No Bells

CONTEST: The person who comments on the most blogs on Marilyn (F.M.) Meredith's tour will win three books in the Rocky Bluff P.D. series: No Sanctuary, An Axe to Grind, and Angel Lost. Be sure and leave your email too, so Marilyn can contact you if you are the winner.

﻿﻿
﻿﻿F.M. Meredith, also known as Marilyn Meredith, is the author of over thirty published novels—and a few that will never see print. Her latest in the Rocky Bluff P.D. crime series, from Oak Tree Press, is No Bells. Rocky Bluff P.D. is a fictional beach community between Ventura and Santa Barbara and F. M. once lived in a similar beach area.


About Marilyn's latest mystery, No Bells: 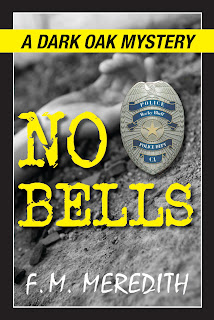 Officer Gordon Butler has finally found the love he’s been seeking for a long time, but there’s one big problem, she’s the major suspect in a murder case.


That almost sounds like the title for a mystery doesn’t it? Actually it’s what I encountered along the way on my publishing journey.

I began writing in “the olden days”—the days of typewriters and carbon paper and mailing your whole manuscript off in a box with another addressed and stamped box inside for it to come back to you.

My first book that I ever sent off to a publisher was an historical family saga based on my family’s genealogy. It was rejected and returned to me many times—often with pages wrinkled, coffee stained and smelling like cigarettes. About every fifth return, I rewrote and retyped it, quite a chore at 500 plus pages.

After nearly 30 rejections it was accepted by a major publisher—and I think it was about a three or four year process. In the meantime I was writing a second saga about the other side of my family. When I sent that one to the same publisher, the editor who had accepted the first one had left the house—new editor wasn’t interested.

I finally found a publisher for that one—and my first encounter with a crooked publisher. The book was published, looked great, never got a royalty and after my first order of books couldn’t get another. Found out the publisher had taken all the money he made and gambled it away in Las Vegas. He eventually went to jail.

Of course I was writing other things by this time. When I finished what I called a Christian horror I couldn’t find a Christian publisher who would publish it because it was too scary and those who published horror thought it was too Christian. Found a small press, publisher loved the book, but he wanted me to make it camera ready. Remember this was “the olden days.” No easy way to make the manuscript look like book pages. By this time I did have a computer, but had no clue how I should do this. A friend who owned a computer store, let me use his computer before he store opened and showed me how to do what I needed. I worked on it diligently for weeks. When I was done I contacted the publisher. His wife answered, her husband died and she wasn’t interested in carrying on with the business.

My first mystery was published by another crooked publisher—this one printed 50 copies of my book, cheated a bunch of authors out of co-op money, and fled the country. Fortunately, I found another small press willing to republish that book. She also published the first four of my Deputy Tempe Crabtree mysteries—and then she died. (That was terribly sad, we’d become friends and her death was unexpected.)

I’ve had at least 5 agents along the way, and not one did anything for me. I’ve had encounters with other publishers who weren’t on the up and up, but I’m going to make a really long story a bit shorter and move to the publishing of the Rocky Bluff P.D. series. Final Respects the very first one was picked up by a publisher I found in Writers Market. It was my first experience with an e-publisher. This was long before e-readers came along. The book was wonderfully edited, but buying it was far too complicated.

The Rocket eReader was invented and another publisher picked up the first and second book in the series. We had some problems. The next two books were published as paper and e-books, but the publisher soon went out of business. That’s when Oak Tree Press came along and the next book in the series was published. Since that time, OTP has published the earlier books in the Rocky Bluff P.D. series on Kindle and the latest three as paper and e-books.

And of course that brings us to now and the publishing of No Bells the latest in the Rocky Bluff P.D. series, available in e-book format and trade paperback.

The whole process of getting published is much easier now with computers, the Internet and email.

CONTEST REMINDER: The person who comments on the most blogs on Marilyn's tour will win three books in the Rocky Bluff P.D. series: No Sanctuary, An Axe to Grind, and Angel Lost. Be sure and leave your email too, so she can contact you.

Please welcome Marilyn by leaving a comment, even if you  haven't commented on any of her other tour stops.
Posted by Morgan Mandel at 3:00 AM No comments: