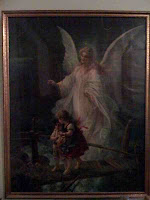 Once upon a time, many years ago, a boy and a girl went to kindergarden together, and grade school in Chicago. The boy's and girl's Mom were good friends. Since the boy was born on the Guardian Angel Feast Day, his Mom bought a picture from the girl's Mom at her shop. It was that of a Guardian Angel watching over a small boy and girl as they cross a rickety bridge over rushing water.

When he was in fifth grade, the boy's family moved to the suburbs, while the girl's remained in the City. The boy and girl grew into a young man and woman, entered high school and lived separate lives.

The young man went to college and dated throughout freshman year, as did the young woman. Then one day in sophomore year, the young woman's roommate introduced her to a friend in the school cafeteria. It turned out to be the same boy she'd known years before.

They went steady. Then, over four years later, on Veterans Day in 1972 they got married.

All these years later, 36 to be exact, that same picture, a little faded by now, hangs in the hallway of my home. I was that young woman and my husband was that young man.

Posted by Morgan Mandel at 5:28 PM