Meme - Six Book Things About Myself

I missed the first round on the meme since I had my blog critique yesterday, but better late than never I guess.

Chris Verstraete from Candid Canine tagged me to say Six Book Things About Myself, so here goes: 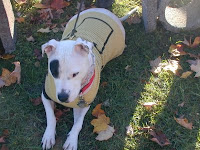 1. I like to use photos to break up my blogs. Here's Rascal at the Blessing of the Animals two years ago. We were disappointed to learn that Holy Family Church wouldn't have the Blessing this year, but Fr. Hoffman promises to have it again next year.
Unfortunately, Rascal doesn't promise to behave in the meantime.
2. I don't stick to one genre when writing. My first book, Two Wrongs, is primarily a mystery, though it does contain a romance. My second book, Girl of My Dreams, is a romantic comedy, though it contains a sliver of mystery. Now I'm working on three books: one is a mystery, another is a romance, the other is a book about my dog, Rascal, based on actual experience.
3. I listen to other people's conversations when I'm walking to work in Downtown Chicago and try to remember what they say so I can include some version in my books. Often by the time I get somewhere to write it down it's lost, just like my dreams when I wake up after them.
4. I don't always know what I'm going to blog about, but figure it out by something that strikes me while I'm walking my dog.
5. I'm a slow writer. It takes me a long time to get the word count up. Part of my problem is I don't always have large blocks of time to write, so each time I have to go back into the story a bit to ground myself. Another reason is I like to edit, probably more than write. Once the words are down on the page, it's a lot easier to make everything better. The problem is getting the words down in the first place.
6. I created Book Place, a network for authors, readers, illustrators, reviewers, librarians, publishers, editors, and anyone else connected with books to market and share thoughts about their books and writing in general. So far, more than 1300 members are over there networking.

That's my six.
I tag these people to come up with 6 Book Things about themselves:

CLICK THIS and all of the links will appear in the main body of the blog.